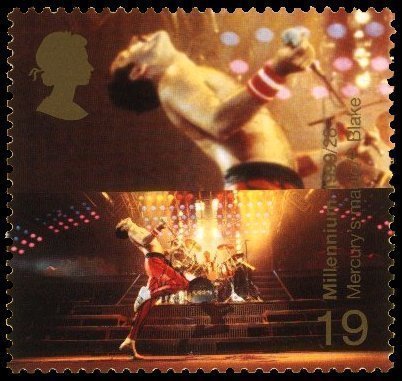 UK collectors will be familiar with this 1999 stamp issued as part of the Royal Mail’s Milennium series featuring Great Britons form all walks of life but not everyone remembers the controversy it caused. Convention dictates that the only living people who may be depicted on British stamps are members of the Royal Family (although Sir Francis Chichester is shown as a tiny silhouette on his yacht in 1967).  Freddie had died in 1991 so this wasn’t a problem.  His drummer Roger Taylor was and is very much alive though and he can be dimly made out in the background.  In its defence, the Royal Mail cited the Queen’s personal approval of every stamp before it is issued so presumably Her Majesty appreciated the nice parallel with the band’s name.

Less well known still is the fact that the Queen frontman was himself a keen stamp collector in his childhood. Born in what was then Zanzibar (now part of Tanzania), he specialised in stamps of his homeland as well as issues from Britain, Aden and Monaco.  Following his death, the collection was bought by the UK Postal Museum where it remains today.