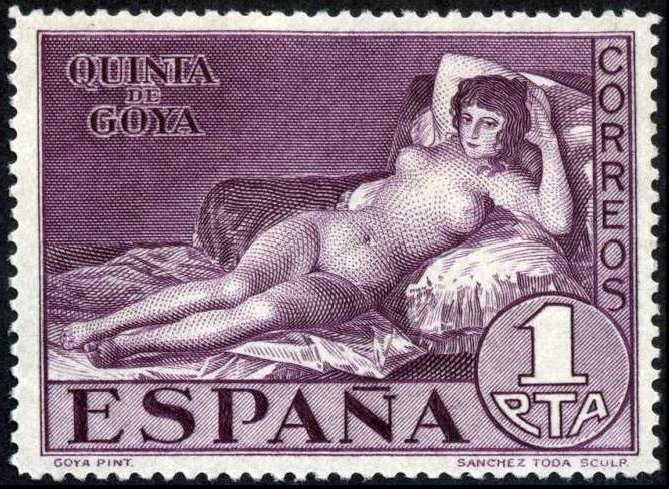 Although the naked human body had appeared relatively often in postage stamps of many different countries before the 1950s, this had mostly taken the idealised form of classical sculpture. Goya’s 1800 realistic painting of an actual woman (albeit one whose identity is still the subject of debate) was regarded as wholly profane and would be confiscated by the Spanish authorities in 1813.

In a parallel which says much about how slowly attitudes changed before the digital age, the image would once again be the subject of a ban over a century later. This time, though, the protector of public decency was the US Mail.

An engraving of the naked maja had been printed on three Spanish postage stamps in June 1930. It is believed that about 240,000 of the three different denominations were printed. They were only valid for postage for three days so a cancelled example is quite uncommon. Even more uncommon was the response of the then US Mail which, later that year, decided to return any post bearing the stamp to its sender. More rare still to the point of non-existence is any such example of a letter returned on these grounds. So there’s certainly something to keep an eye out for.