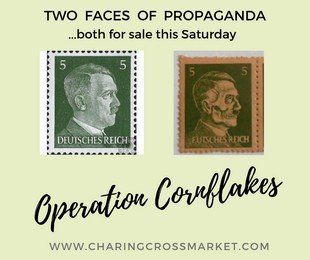 One of our stallholders has a terrific bit of philatelic history for sale. Everyone’s familiar with the Hitlerian profile stamps of the Third Reich but few have seen the British secret service’s attempt to undermine German morale with the forgeries on the right. Operation Cornflakes saw these death’s head “FUTSCHES REICH” (Destroyed Empire) stamps used on fake mail created in its thousands and dropped on bombed mail trains. The plan was for this to be confused as the real thing and later delivered to addresses around the empire, thereby lowering morale. Although largely ineffective, it’s another stamp with a story to tell. You’ll find many more this Saturday at Charing Cross Collectors Market. See you there.